Our main protagonist has been granted with an attacking animation. Not only that, but she also has a full sprite sheet (with her correct color) 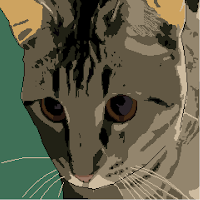 This is her Dialog picture. This pops up anytime she is chatting (meowing?) at various things.


On the engine side, I've added a new RNG (my old trusty Ranrot), I've also made it so you are safe to travel at least one square before you encounter another battle. There were certain play-testers whose random battles were extremely biased (despite a relatively low encounter rate).  Overall this just gives a nicer feel to the game's encounter rate.

Also added was support for background music (rain!), screen flashes, removing scripts from other scripts (this creates a kind of lock and key type system, though that also needs to be overhauled as well). This allows me to slightly better guide the player by semi-gating content in hopes to better steer the player in an otherwise VERY open ended map.

Lastly I fixed up some UI bugs for those who get to much higher levels and get to see more of Tandy's abilities.

So is there any new content from this build and the last build? Technically no. Just a much better looking game. These last few weeks are going to be dedicated to content, bad guys, and hopefully finishing up the first level before the contest ends. The engine is nowhere near 100% feature complete and is still missing basic RPG features such as character screens, map and battle sound effects, but these will probably have to wait.